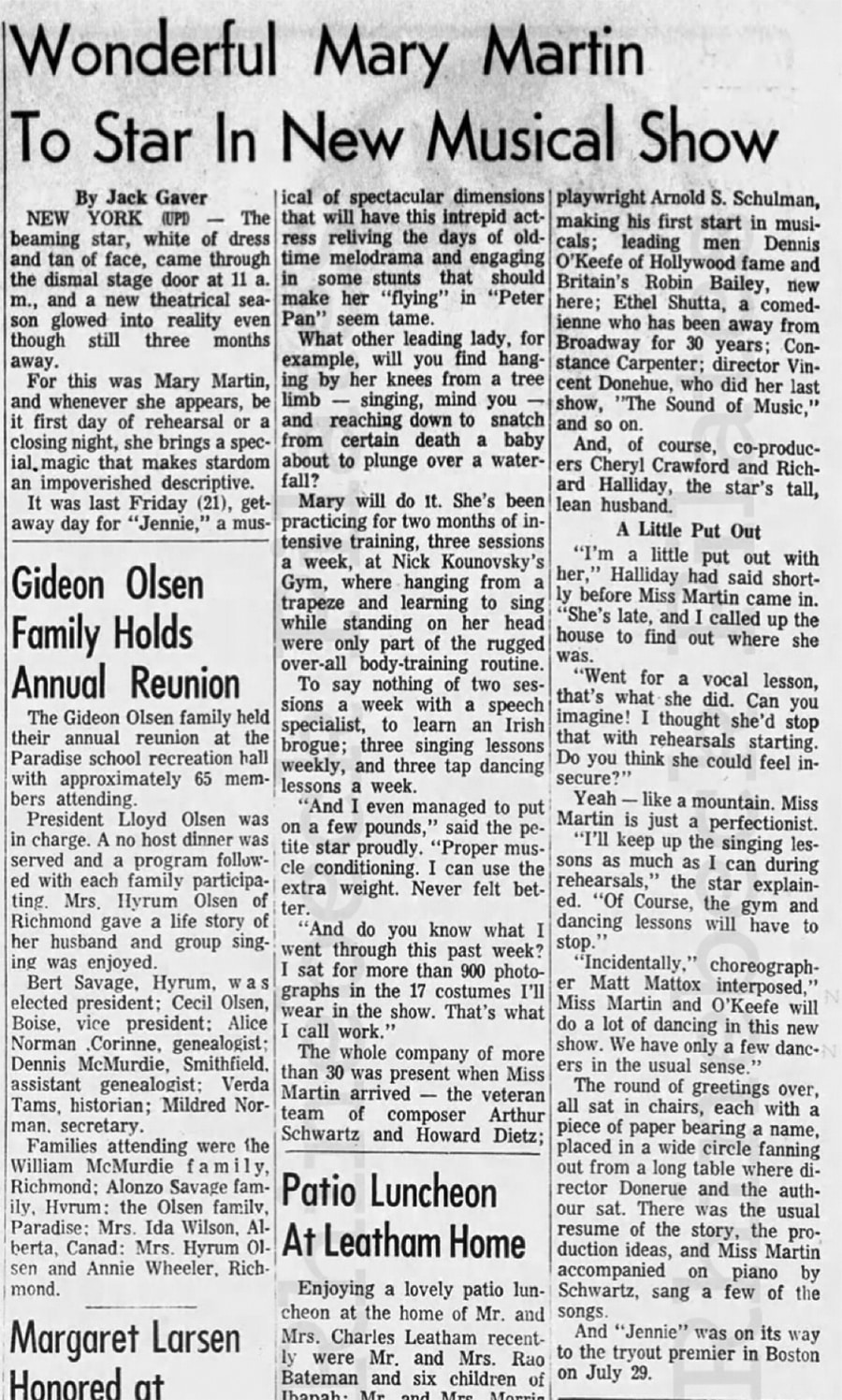 I am thrilled to have recently acquired an original, rare magazine copy of this photo with Mary Martin using the Ped-o-Pul at William Herman’s studio in NYC. So much more detail than in the newspaper version. Image first shared April 22, 2021. 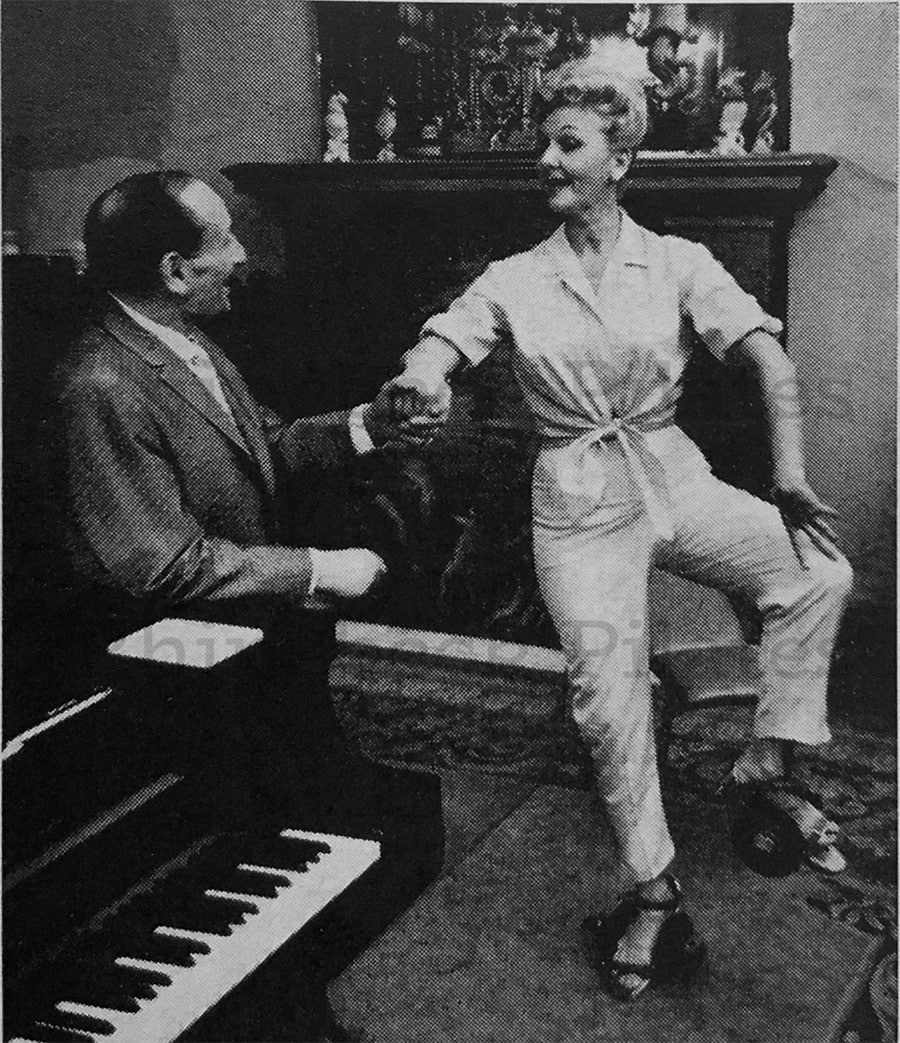 Mary Martin was a famous Broadway Star, as well as a student of William Herman, famous voice coach. We can see Mary Martin use the Ped-o-Pul in this article, which was interesting because it has two springs. Image first shared February 16, 2021. 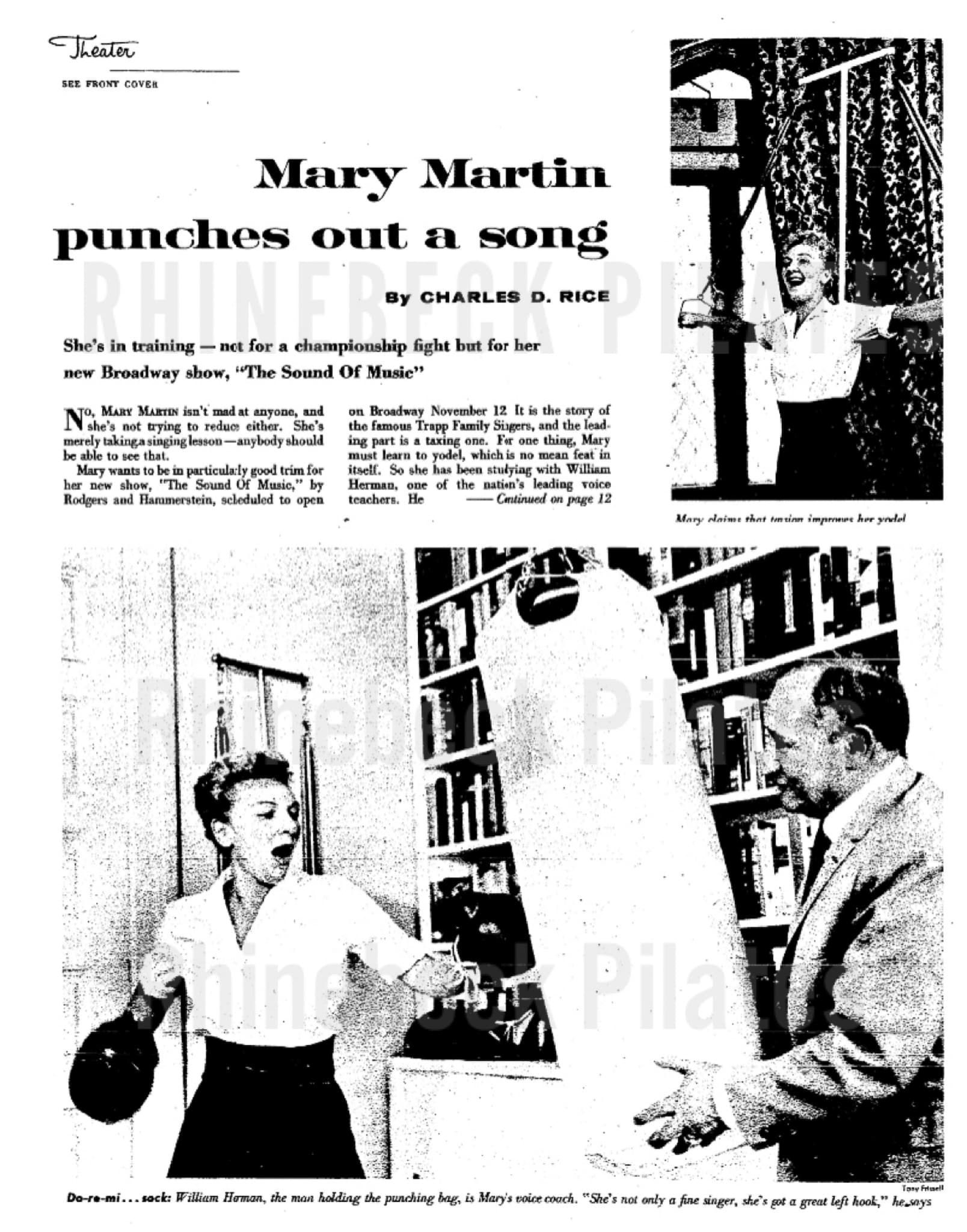 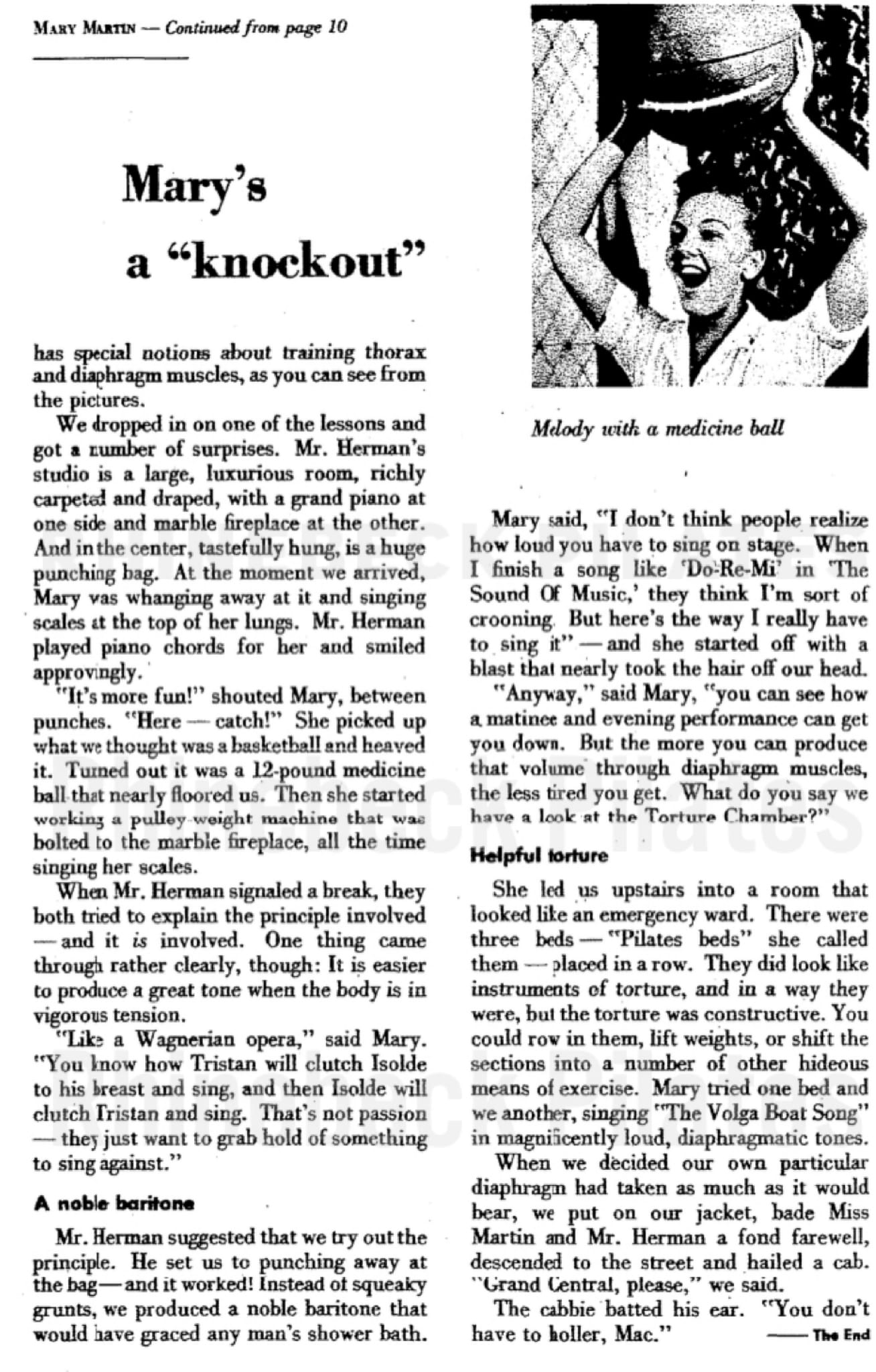 Mary Martin describing her workout in relationship to her singing and her new show. She mentions her workout with William Herman, which includes Iron Shoes (possibly either from Joe or inspired by Joe), and her exercises that she does at Kounovsky’s gym- a gym that was competitive with The Pilates Studio for the same clientele. Image first shared April 3, 2021.

A description of Mary’s workout at William Herman’s studio. I’m not yet sure if the “pulley machine” was the Ped-o-Pul or a non-pilates apparatus that he had. Image first shared April 3, 2021. 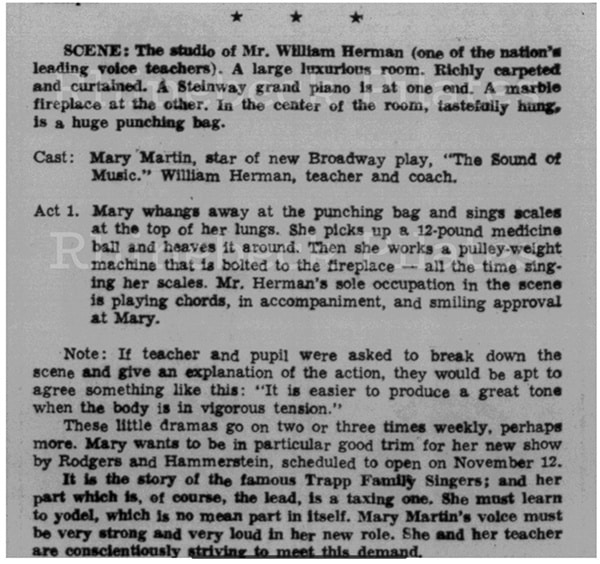 This is the best photo I’ve found so far of Mary Martin in William Herman’s studio with the Ped-o-Pul behind her. It was an amazing day in pilates history research when I saw this photo for the first time, and felt the satisfaction of seeing the bike seat and its shadow behind Mary. What an amazing find, to discover that William Herman’s Ped-o-Pul had a bike seat! Image first shared April 3, 2021. 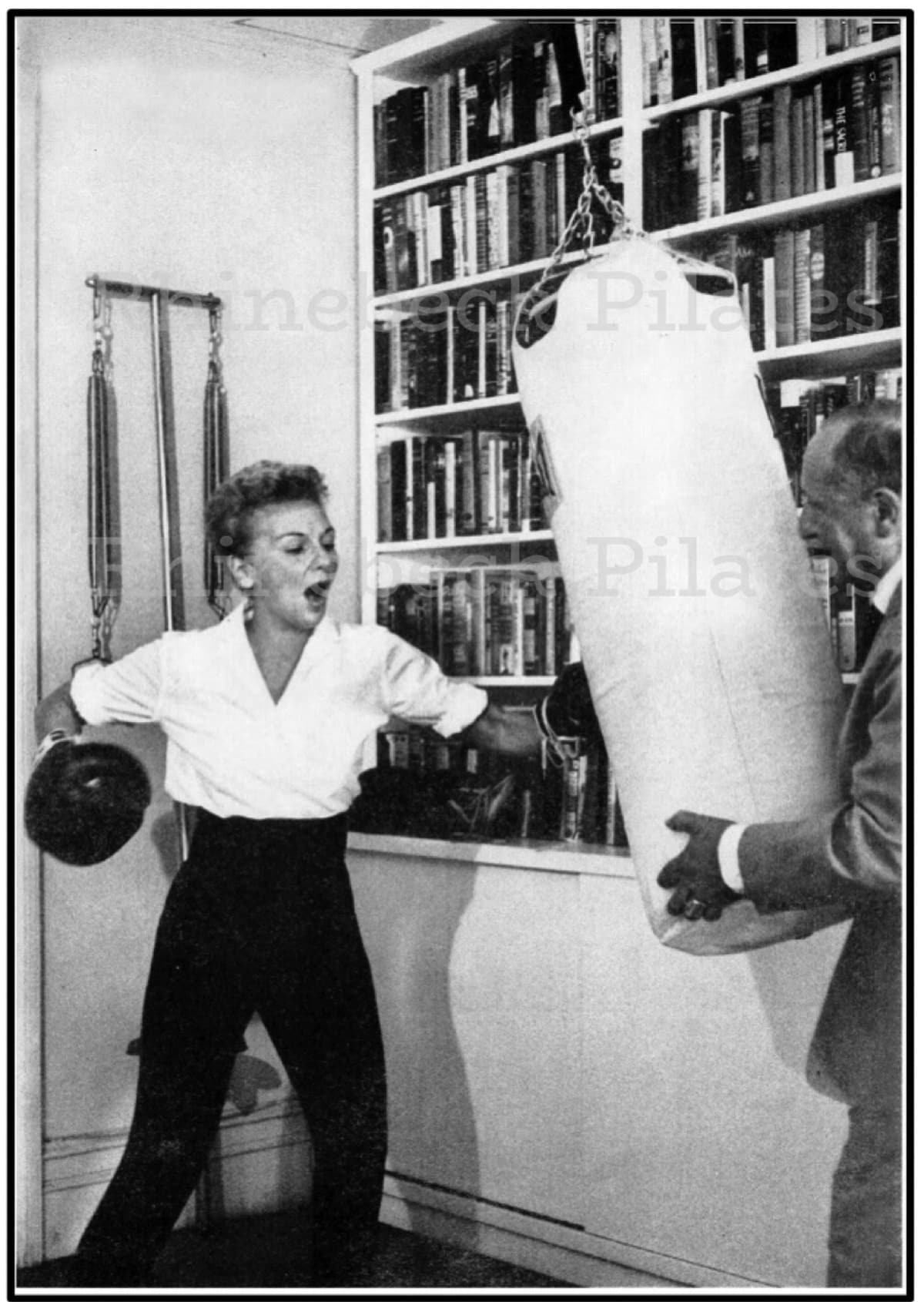 See also William Herman for more information about his techniques, use of pilates apparatus, and place in pilates history. It is evident that William Herman used pilates apparatus in his teaching, but he did not teach the pilates method with it, he taught specific exercises he devised for his students to help them improve their singing and endurance while singing on stage.